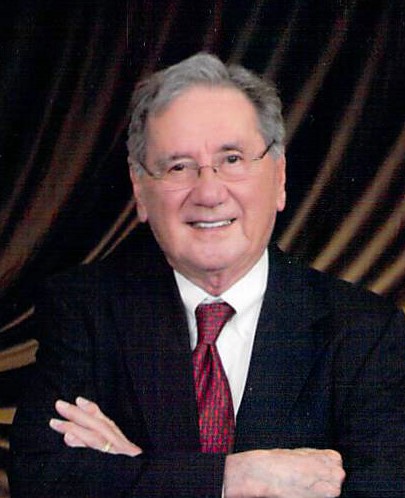 Ed was born on October 29, 1934, in Cuero, Texas to Edward, Sr. and Cecelia Vela. He was the oldest of four boys and 29 cousins. Ed attended the University of Texas and graduated with honors. He and his first wife, Bonnie had three children: Edward, Lisa, and Diana.

Ed was a veteran, having served in the USAF in the Philippine’s as a Burmese translator. After his service, he joined the family grocery store, Vela’s, where he worked for 7 years. Wanting to seek opportunity and leave small town Texas, he left the family grocery store in 1965 and began a long and successful career with the Office of Personnel Management (OPM) for the Federal Government. His first appointment was in Boston, Massachusetts.

Over the next 13 years, his advancement within the government would take him to six cities in four states. When he retired in 1995, he was a Regional Director for the Dallas region overseeing 10 states with OPM. OPM’s Dallas Region had 500 employees and an equal number of contractors in 27 cities under his responsibility. The Region was responsible for the development of competitive, merit-based examinations for Federal employment and for the conduct of personnel background investigations for sensitive and classified Federal positions, among many other management and training programs administered.  Ed enjoyed reading and learning, and received his master’s degree from SMU while working fulltime and was a graduate of Harvard University’s Senior Management in Government program.

Ed’s awards were numerous, and he had recently shared that he was most proud of his Federal Bureau of Prisons “Honorary Warden” distinction. His awards and recognitions came from Native American tribes, Hispanic organizations, women’s organizations, the Endeavour shuttle’s sixth mission crew, and three past U.S. Presidents, to name a few.

A life-long volunteer, Ed translated materials and interpreted for people whose language was primarily Spanish for Habitat for Humanity. He also volunteered for Dallas Taping for the Blind. This included reading textbooks for taping for children and adults who were blind or had eye ulcers. He primarily read books in Spanish. He volunteered for Meals on Wheels, and at the Hood County Library where he served on the Library Advisory Board. Ed was a Rotarian for 35 years, and a member of the Sons of the Republic of Texas.

He was very invested in his five grandchildren’s lives. He babysat, took an active interest in their academics, participated in school events, helped coordinate their own volunteer work, and a wish was that his grandchildren earn their college degrees, without incurring debt. His last grandchild who chose to go to college graduated this year.  Education was a core value in his life, and in turn he passed this value to his children and grandchildren, making true his great-grandmother Salomé Chapa de Vela’s dicho: La educación es la mejor herencia (An education is the best inheritance).

As his children and grandchildren aged, Ed kept in touch through email – sending articles that he believed would resonate with them. When his grandchildren married, their spouses soon became recipients of emailed articles culled specifically for them.

Ed married Sallye McKown in 1980. They lived in Oak Cliff and later Dallas while finishing their careers. They moved to Granbury in 1995 and the two of them enjoyed retirement by traveling extensively, spending time with grandchildren and volunteering for Habitat for Humanity. He was a member of Acton United Methodist Church. For 27 years

Ed is survived by his wife Sallye; his two daughters, Lisa and husband Ray Levy, and Diana Vela; his five grandchildren, David and wife Wylie Dailey, Holly and husband Michael Brittner, Kate Hancock, Hope Hancock, and Jay Danna; by his three great-grandsons, Jace, James, and Micah; and by his brother, Herman, and wife Millie Vela.

In addition to his parents, Ed was preceded in death by his son, Edward Vela III; and by two brothers.