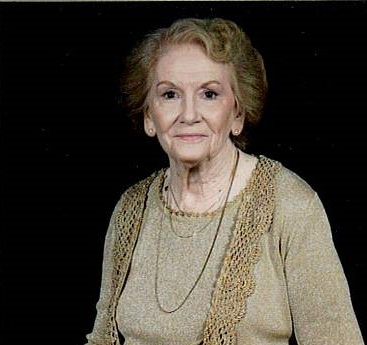 Freddie Herring, age 96, passed away at home on November 19, 2022. If ever anyone embodied the Greatest Generation, it was this strong, resilient, fiercely headstrong and devoted woman. Freddie Aurline Rice was born November 18, 1926, on a farm in Montague County, Texas.

She was the first child of Clarence and Rosa (Cauble) Rice. Freddie was raised in New Harp alongside her younger sisters, Delma and Peggy, with many cousins nearby. Sadly, her little brother, Bobby, died as a toddler. The family attended the New Harp Church of Christ.

Freddie was baptized at the age of 12 in a nearby cattle tank (the church had no baptistry). Her baptism inspired her Grandpa Rice, in his old age, to be baptized as well. Freddie graduated from Forestburg High School in 1944 as Valedictorian. She was unable to attend her graduation ceremony because she had the measles. When asked what she did for fun as a teenager, she said she and Delma, along with friends Juanita and Cornelia Freeman, would take a bus to Dallas, where the Freeman girls’ grandparents lived. They rode streetcars to movies at the Majestic Theater and to the all-night gospel singing convention at the Sportatorium.

Freddie spent her life in Texas, where her work career spanned sixty­ seven years. After attending business school in Dallas, she and Delma ran a local store in Alvord (where the family moved to in 1946). The store included a soda fountain and a Trailways ticket desk. An opportunity arose for Freddie to work as a ticket agent for Continental Trailways in Amarillo. She later worked in book-keeping in the transportation industry. She worked for International Harvester (now Southwest International) for more than 50 years, first in Wichita Falls and, later, in Dallas. When she retired at the age of 85, she had enough paid sick days to buy a brand-new car.

It was while working in Wichita Falls that Freddie met Joe Herring, and they wed in 1955 in Burkburnett. They purchased a home in Iowa Park in 1958, when $11,000 would buy a new 3-bedroom house! They joined Faith Village Baptist Church, where they loved singing in the choir. She was baptized again-but this time in the clean water of a baptistry.

Work led Freddie and Joe to a new home in Bedford. They were active members of the First Baptist Church of Euless. Freddie loved taking care of her immaculate yard, cooking, reading newspapers, working,

shopping and dressing stylishly. After Joe’s death in 1996, Freddie continued to work and lived alone in the Bedford home. At the age of 90, she volunteered to give up her driver’s license due to failing eyesight. After the sudden death of her son, Michael, in 2017, she relinquished some independence and moved closer to family. She relocated to Granbury in 2020 with her granddaughter Christi and her family. Now she has gone to her Heavenly Home, where she has perfect peace and perfect vision in the presence of the Lord and all of her dearly missed loved ones.

Freddie was preceded in death by her parents, Clarence and Rosa Rice; her husband Joe Weldon Herring; and her son David Michael Stilley. To cherish her memory, she leaves behind grandchildren Christi Choate, Blayde Choate and Carly Stilley; great-grandchildren Stone Choate, Brix Choate and Adalynn Duerson; her daughter-in-law Kathy Stilley; and her first daughter-in-law Debbie Stevens. She is also survived by her sisters, Delma Calvert and Peggy Rice; nephew Steve Calvert and his family; niece Pam Province and her family; and by beloved stepdaughters Ann Rogers, Linda Land and Rita Padgett-and their children, grandchildren and great-grandchildren.

The family thanks the entire staff of Interim Hospice, who made it possible for Freddie to live at home with outstanding care until the end. Krysta, Ashley, Connie, Suzzi, David and Mitzi, we express our sincere gratitude. Private caregivers Pam and Patty-you were heaven sent.