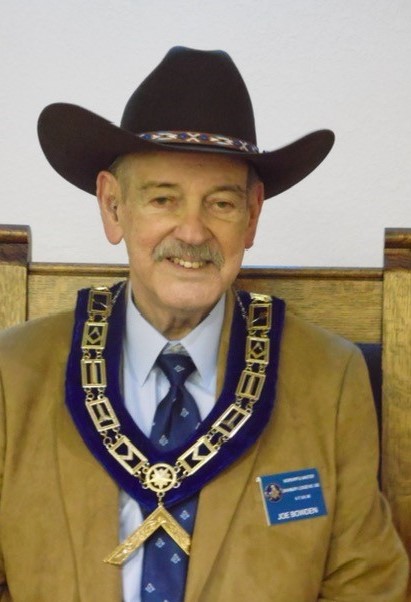 Visitation will be held from 5 until 7, Monday evening, November 14, 2022, at Wiley Funeral Home, 400 Highway 377 East, in Granbury.  A graveside committal service will be held at 1 P.M., Tuesday, November 15, 2022 at Oakwood Cemetery in Waco, Texas with Masonic Burial Rites.

Joe was born on July 25, 1941, in Waco, Texas to Clint “Buster” and Imogene Bowden.  He graduated from Waco High School in 1959 and later attended Arlington State College in Arlington, Texas.  Joe married Sidney Naomi Almon on January 2, 1986 and they enjoyed 30 wonderful years.  Together they made their home in China Spring, Texas for 20 years and then relocating to Granbury in 2007.  Joe was a member of the Masons since April 1974.  Before his passing, he was an active member of the Granbury Masonic Lodge #392 AF&AM and was the current Worshipful Master of that Lodge.  In addition to playing golf, he enjoyed outdoor activities including hunting, fishing, and shooting.  Most of all, Joe will be remembered for his love and devotion to his family.

In addition to his parents, Joe was preceded in death by his wife Sidney in 2015, grandson Christian Scherff in 2017, daughter Carla Henley in 2021 and his brother, Gene Day Bowden.

In lieu of flowers, memorials may be made to Interim Hospice in memory of Joe Lynwood Bowden.